Day 1 of the WSSA 2016 AAU Junior Olympic Games Sport Stacking Championships is in the books. It was a great day of competition where we saw 260 stackers finish their two rounds of individual events, one round of Doubles and one round of Timed 3-6-3 Relays. After a long day of competition the stackers came back strong in the Head to Head relays. The newly reformatted JRO Challenge brought back the top 32 male and top 32 female stackers in a head to head relay that will be finalized in the Stack Of Champions. 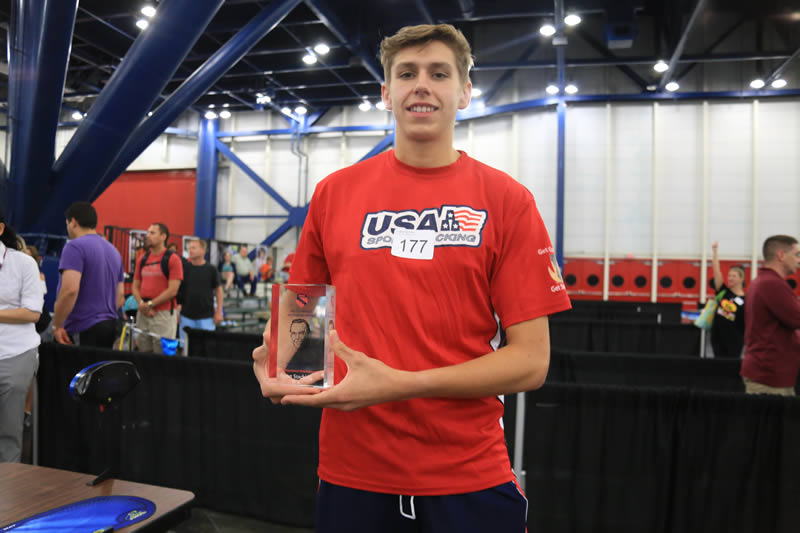 A highlight of the day was the presentation of the AAU Joel Ferrell Outstanding Performance Memorial Award to Dominic Valerian. This 18 year old stacker from Ohio has been a part of Team USA since the 2010-2011 season and a great mentor to younger stackers. He has also held world records, earned sportsmanship awards multiple sports, and excels in both hockey and lacrosse. Congratulations to Dominic!

Opening ceremonies brought some great reflection as we saw stacker’s photos who had attended the past 5 years of the Junior Olympic Games. We were thrilled to have a choir of stackers from Hillside Academy in Garland, TX to sing the National Anthem. Stackers from 33 states and 6 countries represented Sport Stacking across the world.

Good luck to all stackers as they enter finals tomorrow. Doors open at 8:00 am starting with the 3-6-3 Timed Relay finals followed by Doubles and then Individuals. Don’t miss the Stack Of Champions starting at 1:30 pm.

The results of Friday's Prelims are listed below. Those qualifying for Saturday’s Finals are the top 10 in each individual event, the top 5 in Doubles and top 4 in the Timed 3-6-3 Relay.